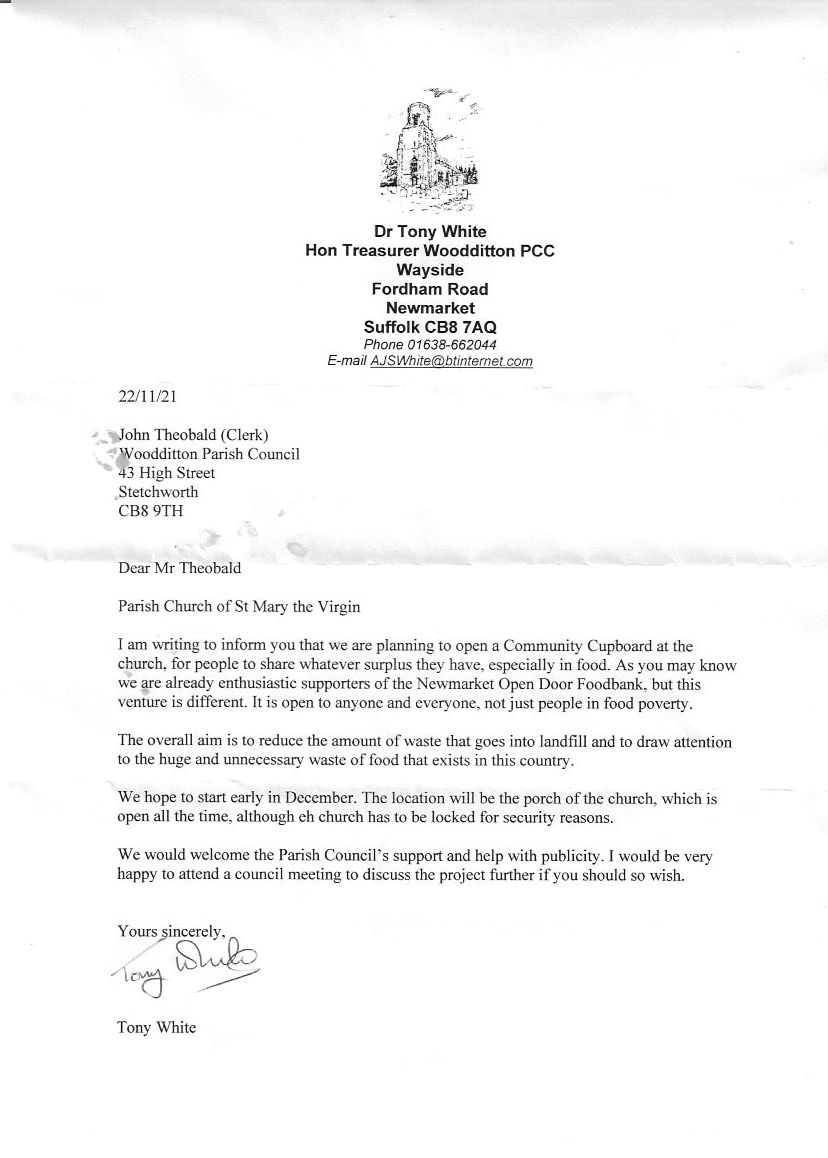 Pray for the souls of the gallant dead

The church comes within the Ely diocese. The minister (from July 9th 2008) will be the Revd. Margaret (Ann) Gurner, The Rectory Cheveley, who is also responsible for the parishes of Ashley, Cheveley and Kirtling. The church magazine 'The Link' also covers the four parishes and is published monthly.

The organ. The single manual church organ has been maintained in good condition. It was described by a visiting organist as "a lovely little organ."

The five bells of the Church of St. Mary the Virgin Wood Ditton ring out for Tuesday evening practice, at weddings and other special services, kept alive by a small but dedicated team of bell-ringers.

Wood Ditton Church originally had only four bells but in 1823 it acquired a fifth. The tower at Weston Colville Church had collapsed, and the only bell to survive intact was the treble, which was brought to Wood Ditton. A new bell-frame was constructed from locally felled oak by W. Hart of Brinkley to accommodate the fifth bell.
The largest bell (the fifth or tenor) cast by Stephen Tonni in 1588, weighs 12.5 cwt., the fourth also by Tonni weighs 10.25 cwt. The third (founder unknown) weighs 7.5 cwt., the second, cast in 1825 by W. Dobson weighs 6.5 cwt. and the treble originally cast by J.Draper in 1608 and recast in 1899 by J Taylor weighs 5.5 cwt.
By the mid-nineteen fifties the main beams supporting the bell-frame had deteriorated to the point where it was considered unsafe to continue ringing and the bells fell silent for nearly thirty years.
In 1984, after a major fund-raising campaign, the main supporting beams were replaced with steel girders, the bells were re-hung and other improvements carried out. The bell-frame constructed in 1823 was still in sound condition. Once more the sound of Wood Ditton bells rang out over the countryside.

Number 4 and 3 bells at rest in the up position,
with their pulley wheels to which are attached the bell-ropes.

Wood Ditton has a long tradition of bell-ringing and the initials of former ringers with dates going back a hundred years or more can be seen carved in the stone pillars in the ringers' chamber.
At rest the bells are left 'up' at just over top centre, where a wooden stay attached to the bell headstock comes up against a slider stop which prevents complete rotation. The call "Look to, trebel going - she's gone", starts the ringing sequence as the lightest of the five bells is pulled off its resting position, followed by the other four in order of size. When all five are in action the tower can be felt to sway slightly in reaction to the vigorous swinging of more than two tons of bells.
Basic bell-ringing is not too difficult to learn, although care must be taken not to become entangled with the bell-rope, as it leaps upward to the swing of half a ton or more of bell. More of a challenge is keeping time with the other ringers and effecting the changes, as when the tower captain calls out a new sequence, such as "3 to treble, 2 to 3, 4 to 2." One hundred and twenty different changes are possible with five bells and considerable co-ordination of mind and body is needed to bring in the new order of ringing and quickly recover the timing. This is evident by the concentration on the faces of the ringers.
The team are always looking for new recruits so if you would like to try your hand give Roy or Jill Steggles a call on 01638 730899
The details of the history of the bells have been taken from the booklet 'St. Mary the Virgin Woodditton - The Bells' compiled by Dr. Tony White in 1984. The booklet contains much more about the history of the Church and the bells. Anyone interested in obtaining a copy should contact one of the Churchwardens.
WOODDITTON - SUPPLEMENT TO HISTORY PAGE
Some notes on the 17th century history of Wood Ditton Church and its then churchwarden Thomas Kilbourne, received as an e-mail on the 4th June 2005 from one of his descendants, Donald Kilburn who resides in Washington D.C., U.S.A.

Dear Mr. Vincent:
First, I want you to know that I enjoy greatly the “Wood Ditton and Saxon Street” website, and I return to it frequently, especially for the photos.
I am a descendant of Thomas Kilbourne, who in 1632 was a churchwarden at St. Mary’s Church in Wood Ditton. I reside in Washington, DC, USA. I hope you can help me in getting information on two matters.
The following quotation and footnote to it are from: 'Woodditton: Church', A History of the County of Cambridge and the Isle of Ely: Volume X: Cheveley, Flendish, Staine and Staploe Hundreds (north-eastern Cambridgeshire) (2002), pp. 95-7.
[See URL: http://www.british-history.ac.uk/report.asp?compid=18801.]
“Several 15th-century benches with poppy heads have been preserved. A matching bench end was apparently taken to America by an emigrant former churchwarden in the 17th century and survives in a museum there. (Footnote 62).”
“Footnote 62 --Inf. from Mr. and Mrs. Cook, including photocopy of cutting from Sunday Times [of New Brunswick, N.J., U.S.A.], 27 Nov. 1932.”
The 27 Nov. 1932 New Brunswick NJ Sunday Times, referenced in the above footnote, informs that heirlooms of the Kilmer and Kilburn families are housed at the Buccleuch Mansion, and states that among many listed items there is “1 carved oak pothy [sic] (probably a misprint of “poppy”) head. From St. Mary’s Church, Wood Ditton, England, where Thomas Kilburn, ancestor of Mrs Kilburn Kilmer was a church warden (1632).”
Do you know who may have additional information relating to the taking of the bench end from St. Mary’s Church to New England? I suppose the informants named Mr. and Mrs Cook in the footnote were of Wood Ditton in 1932, and are now deceased. But would there be a record they might have relied on for this information?
The second matter is about the motive that influenced Thoams Kilbourne, the 1632 churchwarden at St. Mary’s, to leave Wood Ditton for New England. He was among the 20,000 in the “great migration” to NE between 1630-1640. These emigrants were led by Puritan divines, but historians have doubted that many of the emigrants were motivated religious sentiments to go to NE. A Kilbourne family genealogist, Payne Kenyon Kilbourne in his “The History and Antiquities of the Name and Family of Kilbourne, in its varied orthography,” publ.1856, suggested that Thomas Kilbourn (1632), being of the Church of England, would not have found the Massachusetts Bay Colony to his liking, presumably because of its theocratic (Puritan) government, so moved to Connecticut Colony. I rather believe Thomas Kilbourn did have “Puritan” sympathies. So, my concern is to find out whether the Vicar(s) of Wood Ditton in 1630-1632 were sympathetic to Puritan or Independent beliefs, or were staunchly Church of England (Laudian, so to speak). I recall that at sometime in the past your website named a Vicar around 1610-1620, but I did not keep a note of his name. It was different from the only other name of a Vicar I have found for that time; viz., Robert Levitt, vicar 1618-58; see 'Woodditton: Church', A History of the County of Cambridge and the Isle of Ely: Volume X: Cheveley, Flendish, Staine and Staploe Hundreds (north-eastern Cambridgeshire) (2002), pp. 95-7.
URL: http://www.british-history.ac.uk/report.asp?compid=18801. There it is written:
“Until the Reformation, Woodditton's vicars seem rarely to have served more than a few years. (Footnote 33) Lights in the church were endowed with 2 a. by 1364, (Footnote 34) and there was a guild by 1471. (Footnote 35) During the longer incumbencies from the 1550s into the 18th century, vicars often employed curates. (Footnote 36) Robert Levitt, vicar 1618-58, though ejected from Cheveley in 1644, kept Woodditton despite his apparent unsuitability. (Footnote 37).”Footnote 37 - Walker Revised, ed. A. G. Matthews, 82-3; Bury Classis, ii (Chetham Soc. N.S. xli), 192.”
Also: “During the Civil War Robert Levitt (rector from 1623 [at Chevely Church]) fell foul of political opponents and village gossip and was sequestered in 1644, whereupon he withdrew only as far as Woodditton and hindered the collection of tithes for his successor Abraham Wright, an assiduous presbyterian who was heartily disliked by some of his flock.” See: URL: http://www.british-history.ac.uk/report.asp?compid=18784.
I am somewhat ignorant in matters relating to the Church of England during this period; am I correct in understanding that Vicar Levitt was not in sympathy with the Puritans in England. Can you steer me to some one who has knowledge about the religious atmosphere in and around Wood Ditton during the period 1630-1632.
The following may be of interest. The wife of Thomas Kilbourn, the 1632 churchwarden, was Frances Moody, who was the daughter of George and Margaret (Chenery) Moody, of Moulton. A niece of Frances Moody (by her brother Samuel Moody and his wife Mary Boldero) was Margaret Moody of Moulton. Margaret Moody married Thomas Westhorp. Thomas Westthop was an assistant to William Dowsing, the Parliamentary Visitor officially appointed in 1643 to carry out and supervise in Suffolk the destruction of altars, imagery and "superstitious" inscriptions. Following is from The Journal of William Dowsing: iconoclasm in East Anglia during the English Civil War, Trevor Cooper (ed.). : “On the Monday [Feb. 5, 1644?] he [Dowsing] made his way back to Cambridgeshire, journeying to Bury St Edmunds the first night. Whilst there he may have stayed with Moody family, perhaps at the suggestion of Thomas Westhropp (the deputy with whom he probably lodged on 6 January) who married a Moody a few years later.” And, “Wood Ditton, March 22. We brake down 50 superstitious pictures and crucifixes, and the Virgin Mary written, Oh Mother of God have mercy on us.”
I hope that someday I will be able to visit Wood Ditton. In the meantime, I take pleasure in visiting your wonderful website. It keeps getting better and better.
Thanks for any help you can give me in directing me to someone who may have information I seek.
Sincerely, Donald N. Kilburn
Email: dnkilburn@yahoo.com